We paid $19,634 in December 2010 for a WaterFurance geothermal system, along with thermostats –  and some extra work to connect our two separate duct systems into a single unit. 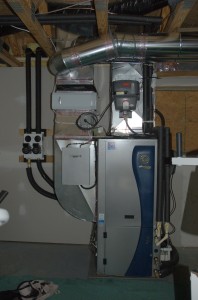 Our system was installed by Love’s Heating and Air – we highly endorse them for installation and service!

We paid $7,400 in December 2010 to have four (4) closed, vertical loop geothermal wells at 200 feet each drilled by Winslow Pump and Well (each well provides one ton of heating and cooling). 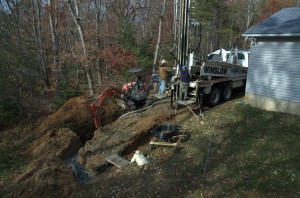 Here is a great article about geothermal technology from the Washington Post: Just before Thanksgiving, my family swore off fossil fuels to heat and cool our 4,400-square-foot suburban home. Instead, we’re relying on the Earth itself: We’ve converted to geothermal energy, which taps the constant temperature of the ground below our house. ¶ The project took us into completely unknown territory — before this started, my knowledge of our forced-air heating system was pretty much limited to cleaning the electronic filter — and it required a harrowing period of construction that included drilling two 375-foot holes in our yard in Derwood, not far from Rockville.

But we felt the results would be worth it. We looked forward to reducing our carbon footprint by replacing our 24-year-old oil-burning furnace and an aging and inefficient air conditioning system.

And the statistics we’d gathered were awesome. “Geothermal systems expel zero emissions,” I was told by Errol Nicholson of Griffith Energy Services of Cheverly. “For every kilowatt of energy consumed by [running] a geothermal heat pump, it yields approximately five kilowatts of heating or cooling. Geothermal heat pumps are over 400 percent efficient. It’s hard to beat that.”

Just as important, we counted on saving a lot of money. First, the net cost of installation was about the same as that of replacing the oil furnace and AC unit with a new system: about $10,000. Notice the word “net”: That price tag is due to an extraordinary assortment of federal, state and local tax credits and incentives that have recently become available as part of economic-stimulus and energy-saving initiatives. Further, we have been assured that our utility bills will be reduced so dramatically that we’ll recoup every dime we spent within a few years; from then on, the savings will be pure gravy.

Four months after breaking ground on this project — months that included record-breaking snowfall and weeks of freezing temperatures — we are comfortably warm and glad we did it. Here’s our story.

The science
Although about a million geothermal systems have been installed in the United States — about half residential, half commercial — the technology still is not well known.

The basic principle isn’t complicated. The temperature of the Earth a few feet below the surface (and for hundreds of feet below that) is moderate and fairly constant. In the Washington area, it stays in the mid-to-upper 50s year-round. The idea of geothermal is to transfer that heat into the house, then make the relatively small leap from there to a comfortable level.

In practice, it means a homeowner needs three basic components: an underground loop system, a geothermal heat pump and an air-delivery system.

The loop system is hundreds of feet of polyethylene piping that is buried in the ground and filled with a water-antifreeze mixture. This fluid circulates repeatedly through the pipes, where it absorbs the underground temperature and brings it indoors.

Inside the house is the heat pump. Heat pumps work like refrigerators: They use electricity to transfer heat from one space to another. During the winter, typical heat pumps extract heat from the outdoor air and bring it indoors. There is heat in the outdoor air, even on freezing days, though it takes a lot more electricity to extract that heat when the temperature plummets.

That’s where geothermal heat pumps come in. They work on the same principle, but instead of extracting heat from the air, they extract it from the 55-degree fluid circulating in the loop system.

In summer, the system works more or less in reverse: The geothermal heat pump extracts heat from the indoor air and transfers it to the fluid, which cools as it circulates through the underground loops. The system also works as a dehumidifier and more efficiently than most traditional air conditioners.

Finally, this heated or cooled air has to be sent throughout the home. Geothermal heat pumps can be connected to hot-water radiator systems, but the overwhelming majority use electricity to blow the moderated air through ducts, like a typical forced-air HVAC system.

How we did it
My family’s geothermal journey started last May, when we paid Sustainable Design Group of Gaithersburg $250 for an energy audit of our four-bedroom home.

The audit said we had spent $4,300 in the preceding year to heat and cool the house and to heat our water. The biggest item in that total was $3,000 for oil. (We use propane for cooking.) A new oil furnace plus new air conditioning would cost at least $9,500.

The audit also gave advice on ways to save money, and we considered replacing windows and being even thriftier with the thermostat. Then we started thinking outside the carbon-based box: We flirted briefly with solar, ruled out wind because of our locale. Partly because of the tax incentives, geothermal seemed like our best bet. As Malcolm Woolf, director of the Maryland Energy Administration, put it: “Geothermal is the most cost-effective of all the renewable energy sources.”

As in many home renewal projects, locating and comparing contractors was a complicated effort. During the process I made two major decisions: First, I decided to act as my own project manager, hiring separate companies for individual pieces of the system. Second, we decided to change the way we got our domestic hot water: A tankless, on-demand heater would add to our upfront cost but also to our long-term savings. (See sidebar, below. )

By October, we had our team lined up and we were ready to go.

First, our plumbing contractor installed the tankless water heater and the piping to connect it to our propane tank. That was pretty painless.

Then a delay, as we had to wait an extra two weeks for the well drillers. When they showed up, they brought a 60-ton, 36-foot-tall drilling rig mounted on an 18-wheeler-size truck. Like a huge Gatling gun, it sent a 20-foot drill eating through its chunk of earth, then loaded another 20-foot rod on top of the first one, and so on. It took about five hours to drill each of the two holes about 15 feet apart and insert two polyethylene pipes (we have been told they will last for 50 years) into each hole. Then the two vertical configurations were connected by a horizontal link about six feet underground. Another truck followed, filling the airspace around the piping with grout to stabilize the pipes and maximize the conductivity.

Next we had to run the pipes into our house. This got complicated. The holes were in our front yard, while the geothermal heat pump was going to be installed in the basement at the back of the house. The drillers hit rock on their first planned route to the back yard, so they changed plans and began excavating along the driveway. The new route endangered the stability of our garage and a retaining wall. We eventually put the piping through the front of the house and across our basement ceiling.

In the end, more of the yard got ripped up than I’d bargained for, and the drilling process took significantly longer than we’d expected. That meant the HVAC company had to reschedule installation of the heat pump. It wasn’t until a few days before Thanksgiving that we were finally able to flip the switch on our completed system.

What we paid, and saved
Geothermal technology has gotten a big boost from the 2008 federal bailout legislation and last year’s American Recovery and Reinvestment Act. First, the bailout bill re-categorized geothermal heat pumps from energy-efficient devices to renewable-energy technologies, similar to solar and wind equipment. Then, the recovery bill provided an unlimited 30 percent tax credit for renewable-energy projects. (That credit expires in 2016.)

Because tax credits lower your taxes by the exact dollar amount of the credit, they are far more valuable than a tax deduction. Check out http://www.dsireusa.org to find the financing incentives offered by your state and county.

Here’s how it worked out for us:

The total bill for the geothermal heating and cooling system was $23,950. (I’m not including either the cost or tax benefits of the tankless hot water system, since it’s a separate option. And I’m not including re-landscaping the yard.)

The 30 percent federal tax credit will take $7,185 right off the top. We’ll get a check for $2,000 from Maryland’s grant program and a $5,000 property tax credit from Montgomery County.

So our bottom-line cost for installing geothermal is $9,765. We expect to make all that money back pretty quickly. First, we won’t be spending $3,000 a year on oil. We will spend a little more on propane, because it fuels the hot-water system. But according to the Maryland Energy Administration, we can expect to use 25 to 50 percent less electricity, because of lower air conditioning costs.

In all, we expect to make back the money we spent for on our geothermal investment in just over three years. With the hot water addition, it will probably take us four years.

How it’s working
The heat has been working well, even during this winter’s record-breaking blowouts. It’s not as dry as our old forced-air heat. There’s no longer any risk of carbon monoxide poisoning, as the system doesn’t involve combustion, flames or fumes. It’s quiet, and we don’t worry as we used to about keeping the thermostat in the mid-60s. We crank it up to the upper 60s. (We like a cooler house.)

That’s not to say some fine-tuning wasn’t required. The blower needed to be adjusted so there wasn’t a differential between floors of the house. The thermostat was changed a couple of times so it could accommodate the new controls. But our contractor was cooperative, and problems were solved.

I can’t wait to see how the air conditioning works.

For anyone considering geothermal, I’d say talking with people who have undertaken a similar project is advisable. Getting different bids and checking references is essential. Consult county officials, or make sure the contractors do, on local rules. The residential geothermal market is still emerging: Prices vary widely, and new, inexperienced contractors are jumping in, seeking customers lured by the tax credits.

“The consumer needs to be careful and prequalify the people you contract with,” says John Turley, chairman of the International Ground Source Heat Pump Association’s advisory council. “A lot of people are getting into this . . . out of desperation.”

But we expect to save thousands of dollars as years go by. We’re happy with the long-term benefits both for us and planet Earth. And all through this long, cold winter, I’ve had a grin on my face.

View all comments that have been posted about this article.

This site uses Akismet to reduce spam. Learn how your comment data is processed.